(noun) - 1 the foreseeing care and guidance of God or nature over the creatures of the earth. 2 a manifestation of divine care or guidance.

I called this chapter "Providence" for good reason. And it is apropos that it comes first, as it sets the foundation for not just the first half, but the entirety of the story. The butterfly effect of Chaos Theory points back to the slightest nudge in the primordial disorder to create an orchestrated concert. "Only because of this nudge did x-y-z happen," that's chance. One nudge times another nudge times another nudge times another nudge times another nudge, until it's mathematically absurd... that's Providence. Life sometimes careens from one catastrophe to another, like cosmic billiard balls endlessing bouncing off one another until the universe is nothing but random white noise. From those collisions, however, emerges pattern and purpose, as if to send a directed message, aimed with sniper precision. Hold your breath. Shit gets eery.

I suppose I could make some allusion to Christ being born in an equally humble place, and there is some solid symbolism there that plays into much of the rest of the story, but in truth...

Look, Honor ain't Christ. Sweet pony, similar magical skill set, but not something you build a dominant world religion around. While Christ may have ransacked the temple collection tables, I doubt he ever--well, let me stop myself before I start offering spoilers.

Bottom line, the auction house is what you see. It's not a place one frequents in hopes of redemption. It's a place of rock bottoms and bottom feeders. Every Thursday night, you can set your gambling dreams on the backs of livestock castaways and sing a farmer's Piano Man for what-might-have-beens.

But again... we don't define greatness, only grant it a chance to be revealed--no matter whence it came. 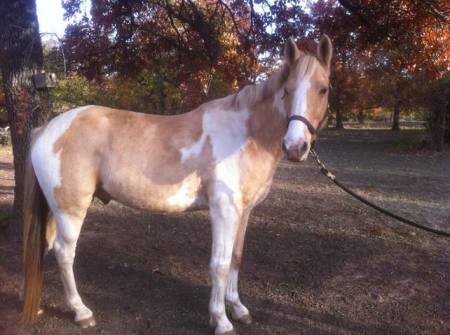 Mavrick was a pretty good horse. I mean, he tried hard. He just wasn't good at much. Friendly and didn't break things or himself, so that's a big equine win. But this lunatic, when on the lunge line was uncontrollably manic for some reason. He sprinted in 10-foot circles like he was being chased by one-legged zombies--the WWZ type, not the Walking Dead type. Take the Kentucky Derby and shrink the track to 1/100 of a furlong.

Not gonna lie. Shit was wildly entertaining. Missi tried to train it out of him, but it was compulsive. As soon as you put a saddle on him, though--as docile as a Kenny G album. I don' t know.

We all have quirks. Embrace the weird. 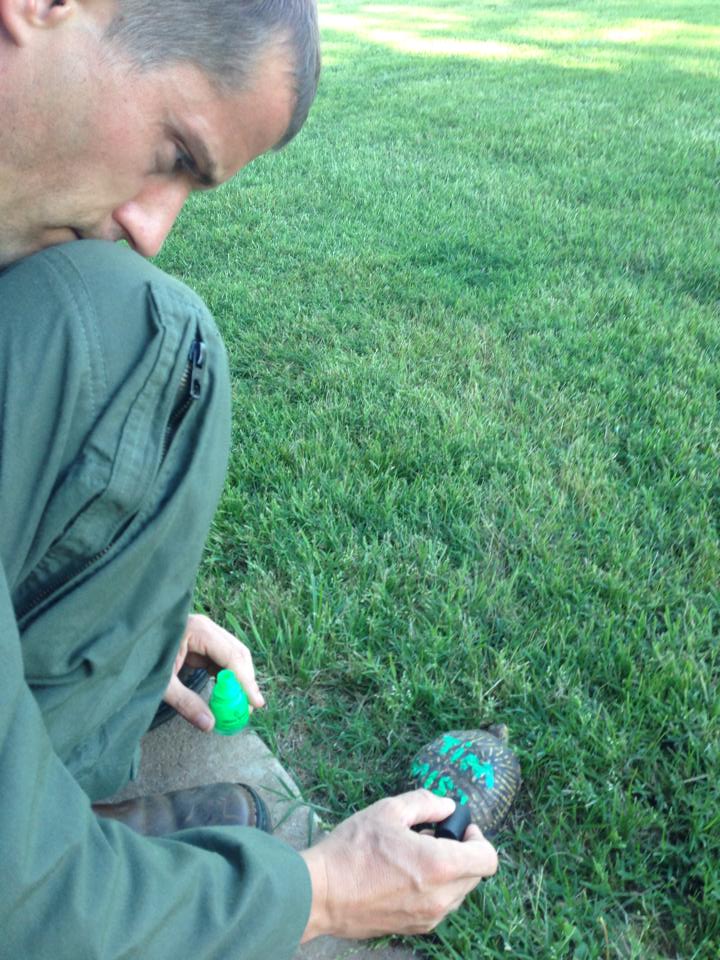 This is Yurtle. He/She (not trying to assume gender... nor would I know any better anyway) showed up the beginning of that first Spring in Choctaw, and every Spring until we left. Nail polish lasts longer than some religions. 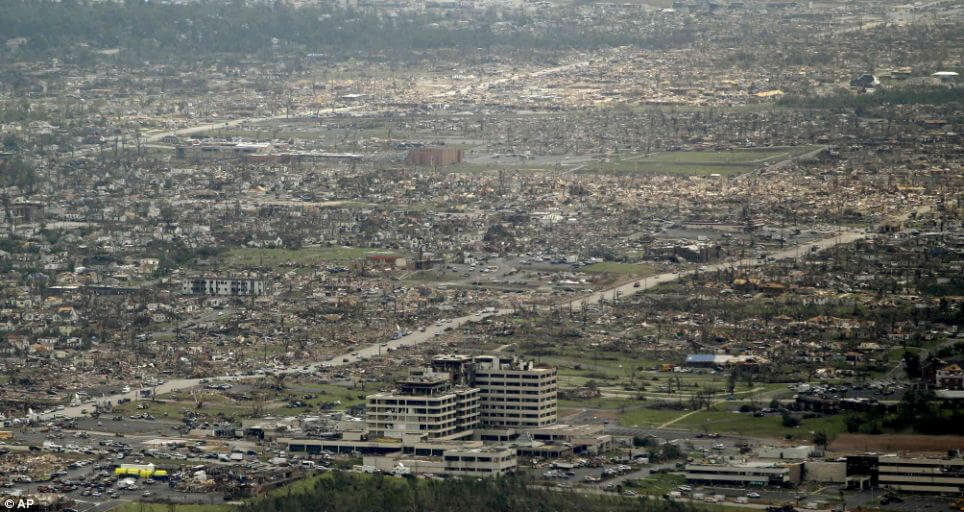 I spent the first 12 years of my life there. The large building in the foreground is St. John's Regional Medical Center where my dad was the Administrator. Toward the top middle is the High School, right across the street is Sunny Jim Park... the Little League field our family called a second residence. The EF-5 didn't just damage the city, it obliterated a half-mile wide path through the heart of it, and in the process erased much of the most sacred pieces of my memory that my mind considered home.

I raced there as fast as I could, and linked up with FEMA teams. There were no signs, no landmarks, no cell service. It was my memory that took us to call-out locations from the search dogs.

Chief asked me, "Are you comfortable doing this?" The insinuation was there would be ugly things under the rubble.

I gave him a brief rundown of my experience with tornadoes, clean-up, and more importantly... bodies.

And bodies are what we found. But this was different than Dover. These weren't my heroes… they were my home. The people. The rubble beneath which they were buried.

There was a father at Home Depot, crushed by a cinderblock wall. We found him atop his two little girls, both still beneath him, hugged tightly in his arms.

Joplin broke something in me. Hard. This was the moment, the moment I was exhausted by death.

They gave me a medal. I'm proud of it. But I fucking hate it.

As an aside, the large building in the foreground is St. John's Regional Medical Center. My dad was the Administrator there. 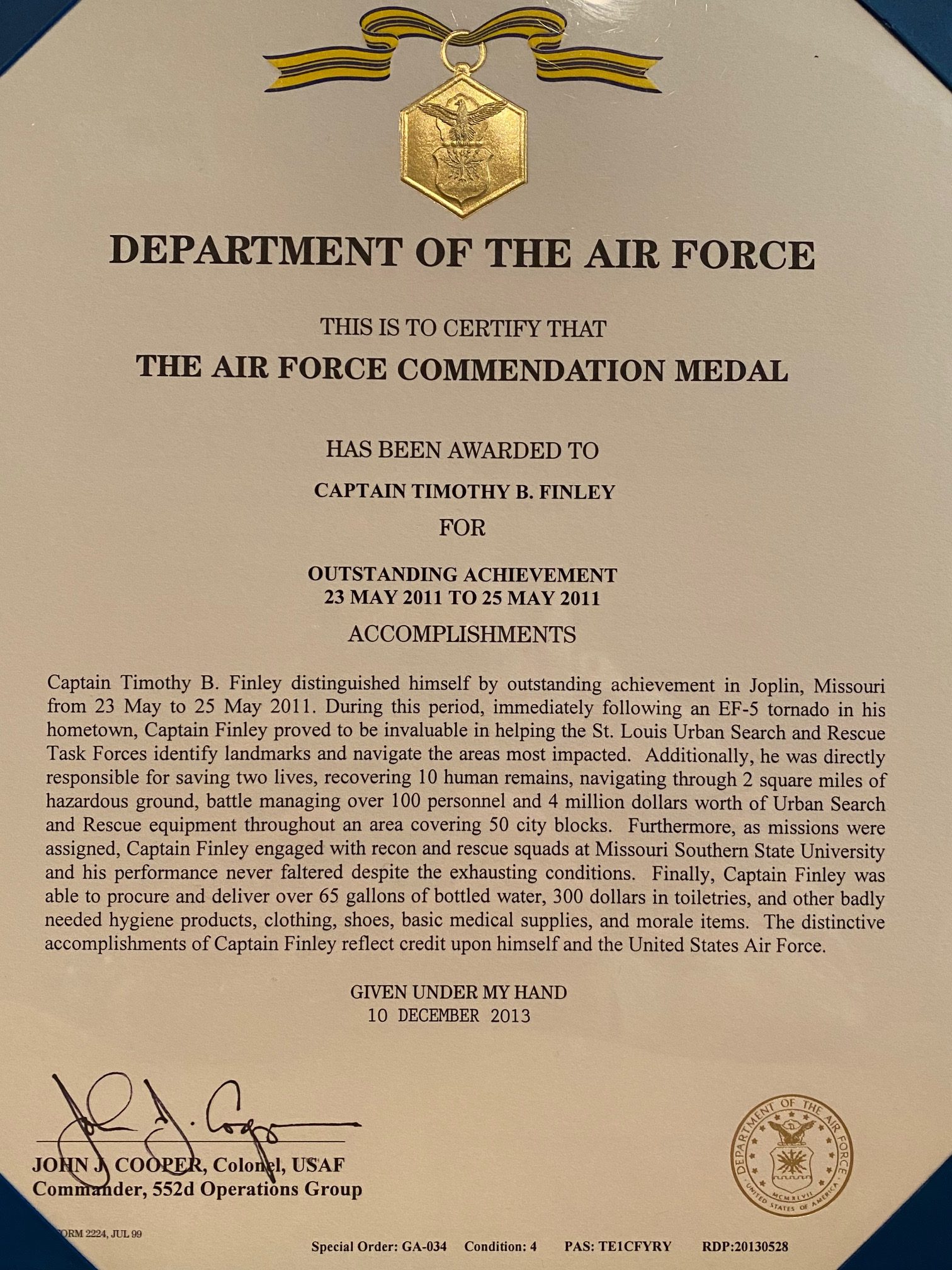 They're called "Accomplishments"... I guess. 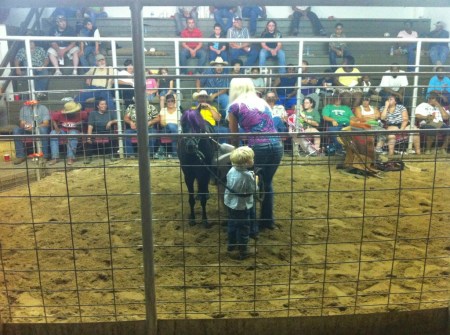 You can see the fog of filth in the glare of the lights. I can still smell it too.

That being said, this pony really was max-adorable with the purple forelock, and every bit worth the $100 bucks. Had I the chance to do it all over again, I would have snagged that pony too. Because who doesn't want a punk pony?

You can see the condition the registration was in. That was after I did my best to flatten it out for the photo. It really was as if someone had wadded it. Below, you'll see the receipt. Legit, $120. That's not to say I got a steal, because his price is not uncommon and slaughter horses go for this all the time. It's to stand as proof that I got THIS horse at a steal... and what was to follow. 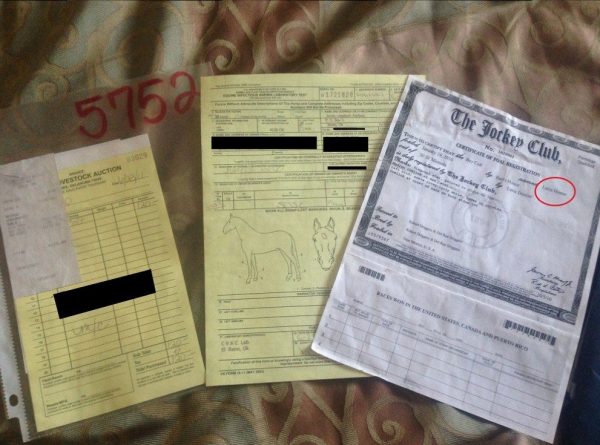 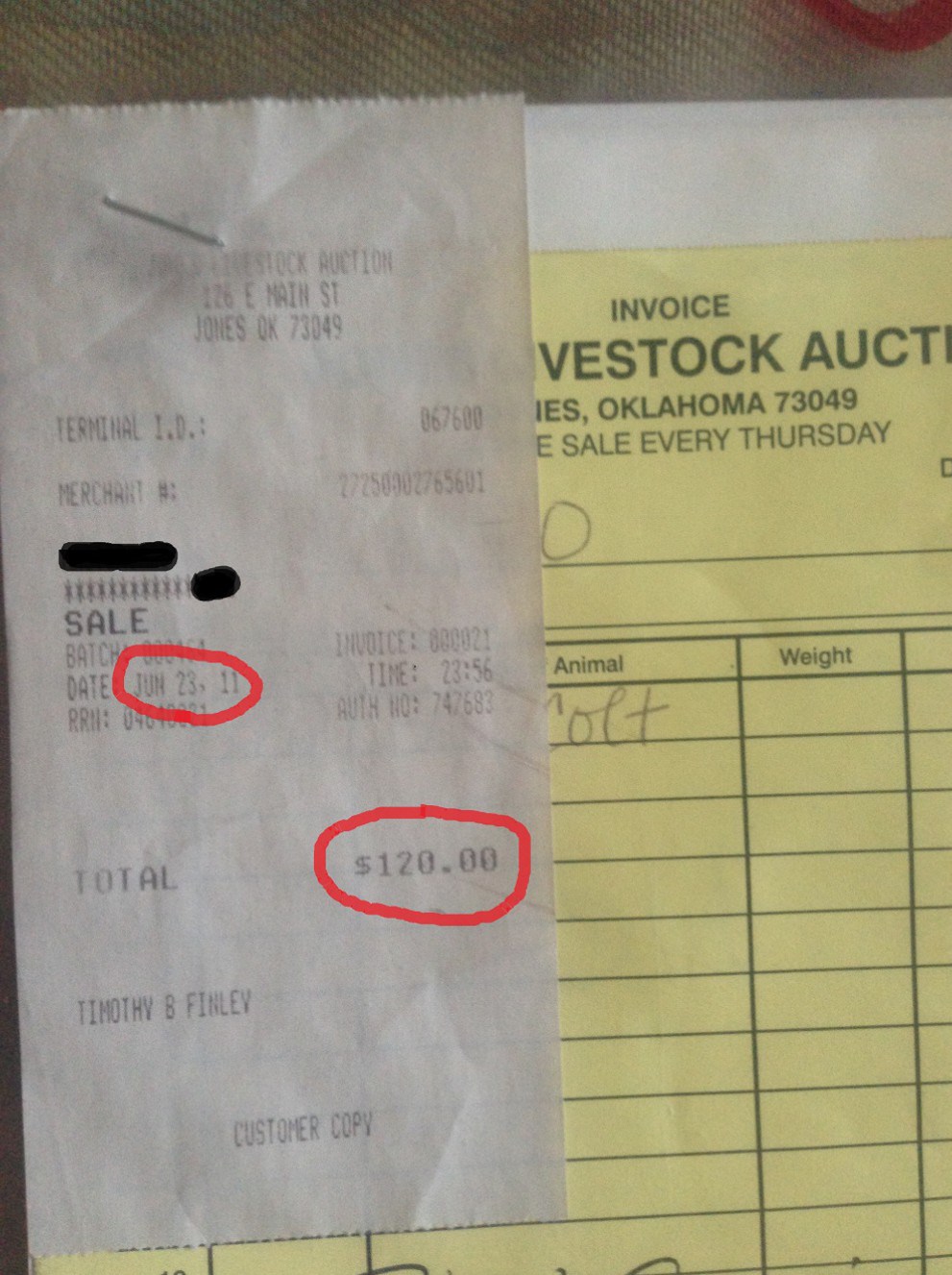 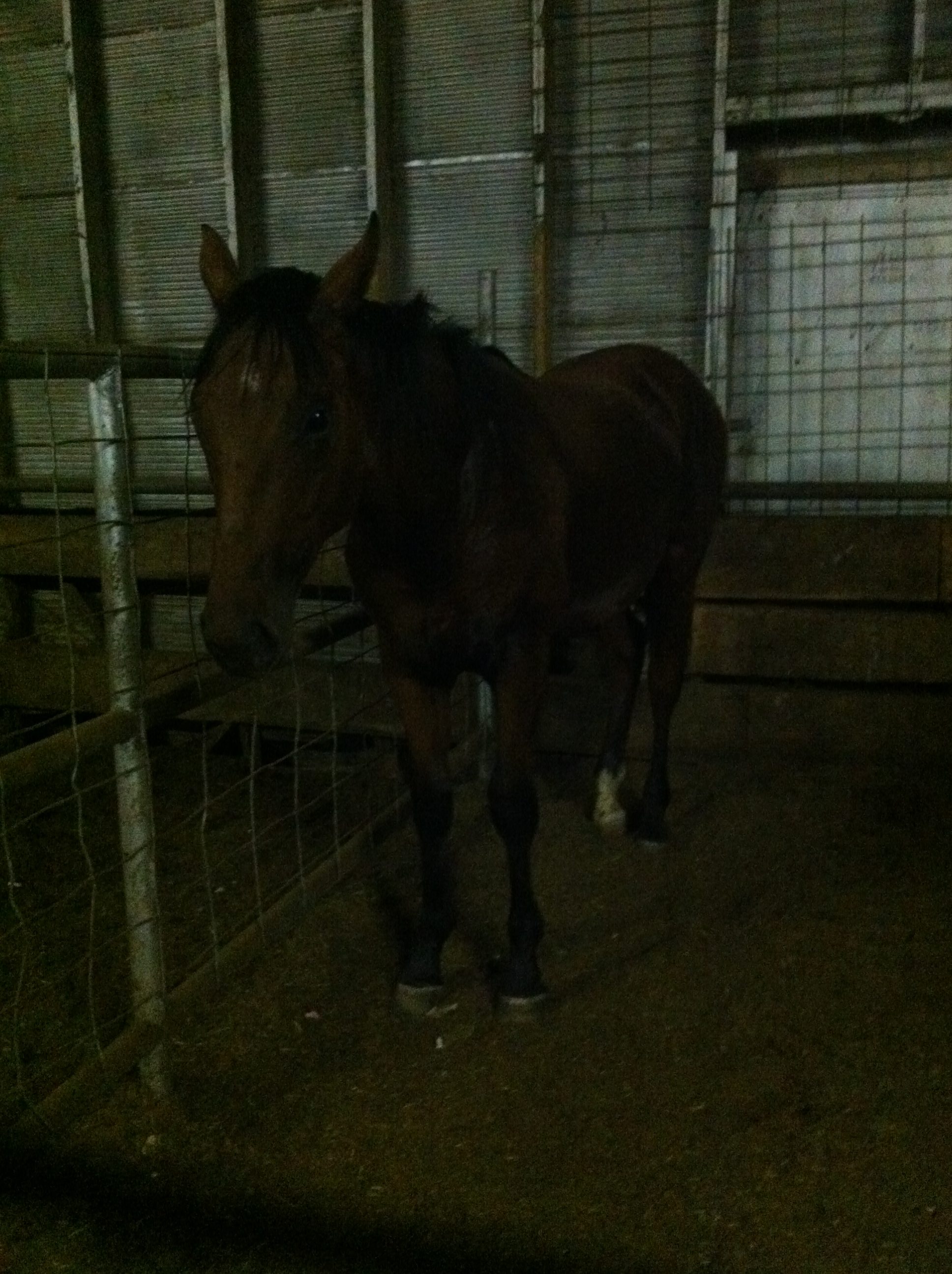 Greatness resides in the world all around us in unlikely places, places we despise, resent, regret, and choose to overlook--places we hide away from, places we don't want great things to come from.

But greatness exists outside and beyond the consent of opinion, or fear, or any other thing that would choose to fence it in. Greatness exists by its own accord and simply is.

It is only by way of a chance, that it is revealed.