Oh! I have slipped the surly bonds of earth
And danced the skies on laughter-silvered wings;
Sunward I've climbed, and joined the tumbling mirth
Of sun-split clouds - done a hundred things
You have not dreamed of - wheeled and soared and swung
High in the sunlit silence. Hov'ring there
I've chased the shouting wind along, and flung
My eager craft through footless halls of air.
Up, up the long, delirious, burning blue
I've topped the wind-swept heights with easy grace
Where never lark, nor even eagle flew -
And, while with silent lifting mind I've trod
The high untrespassed sanctity of space
Put out my hand and touched the face of God
- John Gillespie McGee, Jr.

Things You Have Not Dreamed Of 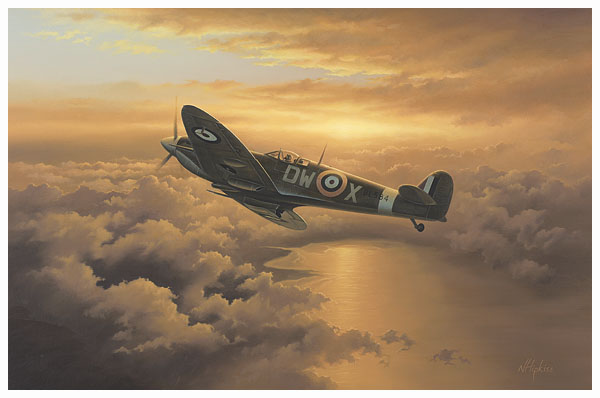 John Gillespie McGee Jr. was a 19 year old Spitfire pilot for the British RAF when he wrote High Flight. Five days after publishing the poem, he was killed over the English Channel defending Britain against Nazi bombers. At a glance, the poem is Mcgee describing the experience of flying to someone who has never flown. But a pilot does not simply describe flying, as a pilot does not simply "experience" flying. The poem is more. He is a man, lit afire by passion describing the pursuit of purpose. He is a man so enamoured by his pursuit that he finds his very purpose in that passion. He leaves behind the "surly bonds of earth", where others who dare not the skies remain--within the safety of fences. He is a horse sharing the thrill of running beyond outside the fences. When he tells of the heights to which he has soard, "where never lark or even eagle flew," he speaks not of birds, but of men, who have not ascended such heights of passion and purpose. And then, the poem turns somber, as in reaching those untresspassed heights, McGee finds brief privilege to humbly brush the transcendent. In his fiery pursuit of passionate purpose, he touches the face of God.
He was killed five days later. He was 19. He lived fierce.

Show Me How to Live

The button below does a far better job of dissecting the video/lyrics/movie than I ever could. Give that a once-through. The synchronicity between the video and TLWH writ-large paints a high-contrast picture between where the story is now and where it began. When we started the story, stagnant rot and survivor's guilt were so malignant that living, itself, was both embarrassing and unbearable. Juxtapose that with the accellerating idea that a total commitment to passion and purpose are worth overwhelming risk--that living fierce bears the burden of risk. As an aside, note that Cornell is driving a white 1970 Challenger. Keep that in your back pocket.